Hopes and fears: the future of XR


I go along to join – a colourful body of humans occupies a corner of the green. I meet a skeleton called Coal, and his friend – A Big Oil Corporation. Clasping two large £10 notes between long golden fingernails, ‘Big Corp’ tells me they only have two tenners because the rest is in an offshore bank account.

A Hare Krishna is dishing out free food, blessed so that all who eat it can be blessed too – it’s an interesting pearl pasta and curry fusion. I eat it gratefully.

This XR manifestation is vibrant. Since 2018, the climate campaign group has managed to get thousands of ‘rebels’ on board from across different social and political backgrounds – with the signed support of around 100 academics. It is now an international group, with 640 groups across 83 different corners of the world, including Iceland, India, Kenya, and Japan.

Rob Callender, a 31-year-old activist, is speaking on the mic. His voice echoes across the crowd. He’s talking about the human rights abuses associated with coal extraction, the burning of the Amazon, economic warfare – and climate change, not as a disease, but as a symptom.

He says to the crowd: “We have a responsibility to ask, after oil, then what? That is what tactics mean. The global oil blockade is beautiful, but it is the frontline is it not the vision. Let us be clear, and many more will be motivated to join.”

“We’ve got to become more radical…and we need to allow criticism to make us stronger.” He ends his talk by bringing up racial power dynamics, from the context of his “very white northern family”. Since the Global South will suffer the more severe consequences of climate breakdown.

It’s interesting that Callender brings this up. Critics have criticised Extinction Rebellion, and climate activism in general,  for being largely “white, left-wing and middle-class”.

The police seem somewhat familiar with the protests, some are even impressed with how quickly the crowd parts for an incoming ambulance. Yet they line the streets routinely, silently waiting to start kettling protestors when the curfew falls. A total of 40 arrests are made throughout the day.

Some activists have told me they are working closely with the police. This relationship has been built as part of a strategy to make the public feel safer about joining. But the heavy police presence is enough to put off people, especially those who are likely to be discriminated against by a largely white, male police force on a daily basis.

An open letter from Wretched of the Earth, a grassroots environmental group that represents black, brown, and indigenous people, has called out XR and asked its members rethink its strategy on arrest.

“This complexity needs to be reflected in the strategies too. Many of us live with the risk of arrest and criminalization. We have to carefully weigh the costs that can be inflicted on us and our communities by a state that is driven to target those who are racialized ahead of those who are white.

“The strategy of XR, with the primary tactic of being arrested, is a valid one – but it needs to be underlined by an ongoing analysis of privilege as well as the reality of police and state violence.”

Three indigenous Peruvian women in dressed in traditional embroidered dresses are in the crowd. One of them tells The Ecologist: “We are representing South America – I am coming from the Amazon of Peru. My friends have come from the Andes.

“We are here to give a voice to what is happening to our communities. Because our forests are being destroyed. And when we try to speak up, we are silenced by our government. Many are killed, especially the indigenous who live in remote areas of the Amazon. We want people here to know what is going on.” 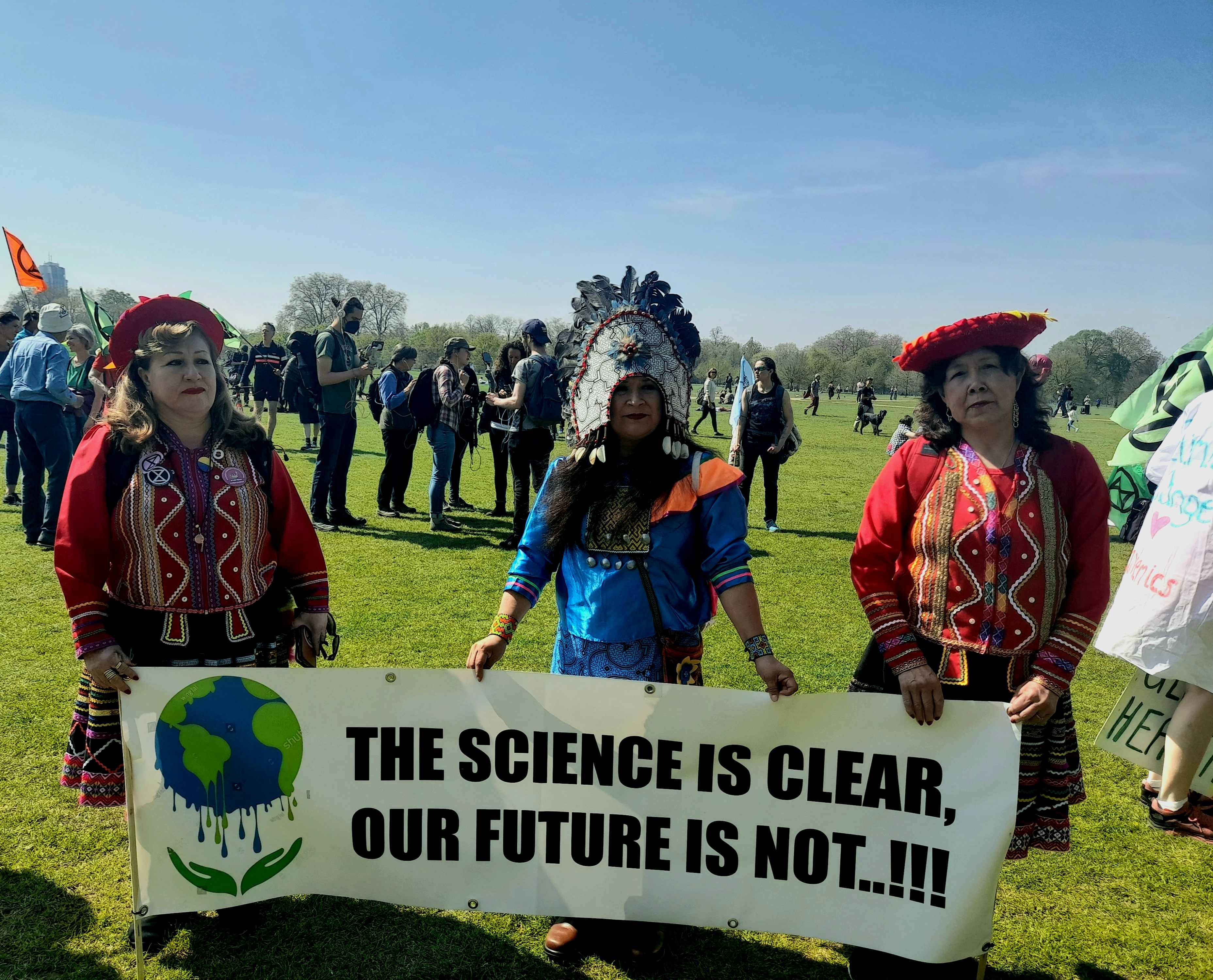 Some of the protestors have flowers in their hair, others wave flags, vibrant against the blue sky. Others have banners with varying slogans and demands. They read “Earth is f***ed”, “peace and justice”, “no oil and gas”, “I’m here for life”, “why is life earth on earth still taking second place to fossil fuel companies?” and “I’m here for my students”. A child holds a placards that states, “you’re burning our future”.

The Samba band finds a way to move in a timely motion as it orchestrates its first moves. The conductor moves wildly, hands waving and conducting the entire band. Perhaps a Samba band embodies what any good movement should be – comprised of many different units, coming together in synchronistic unity. They are loud, they get others to move to the same beat. That is revolutionary.

The demonstrators move through London – they are in the very belly of the grey, polluted, capitalist beast of which they fight. And bystanders are watching with a mixture of bemusement, interest, and most importantly – support.

I meet an Iraqi restaurant owner on Edgware Road, who proudly places an XR sticker on his chest. He says he knows all too well how the colonial exploration of oil can ruin a country. I see people cheering and waving from apartment windows, and an old man at a bus stop giving a thumbs up. It seems the public is on board. The feeling is infectious. 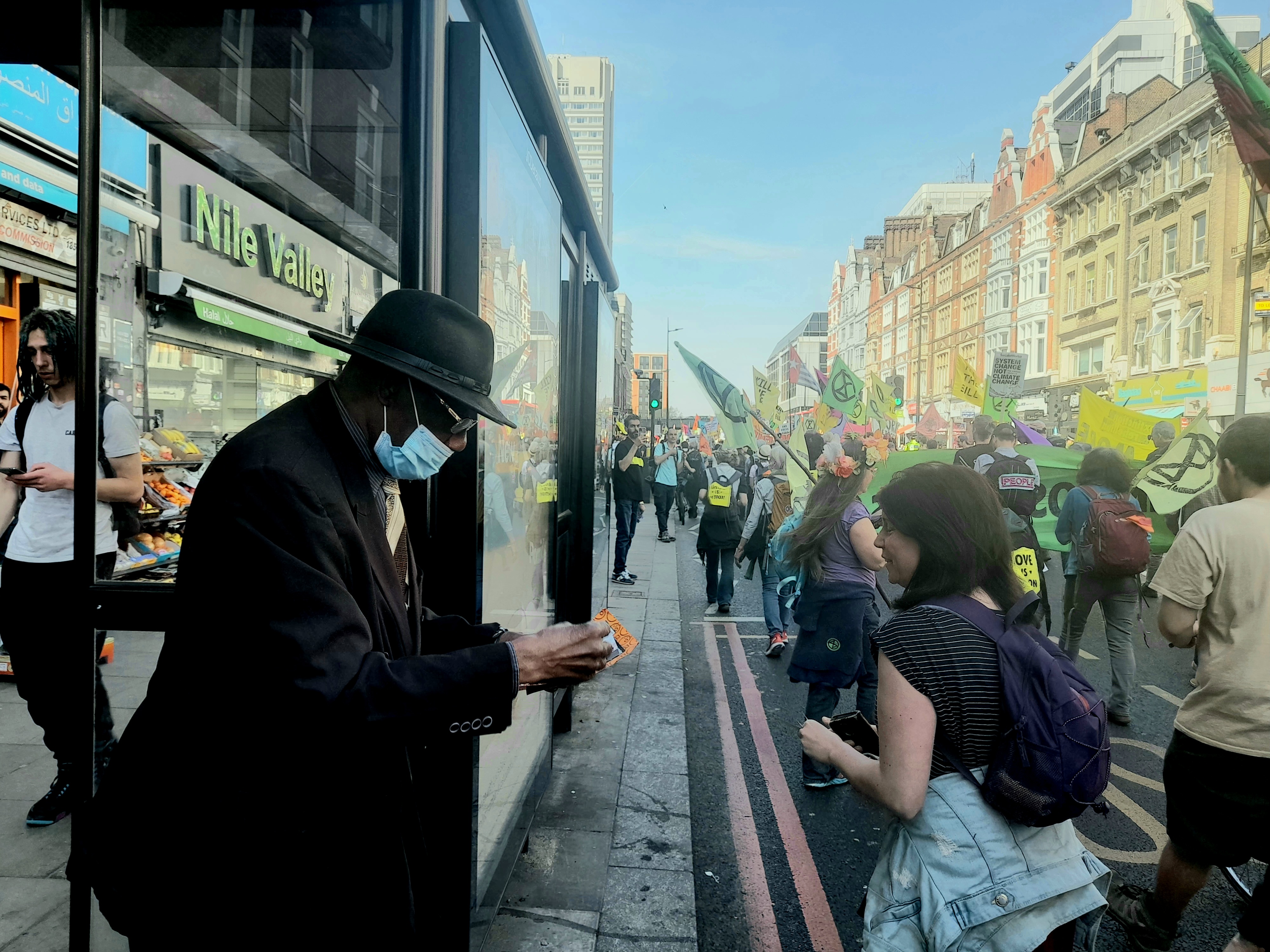 A thirty-second silence outside a magistrates court sets a somber tone. We pay tribute to Emma Smart, an ecologist who has recently been released after going on hunger strike after being arrested for nonviolent civil disobedience. She was one of more than two dozen scientists who stuck their hands to the window of a government building on Wednesday last week, after the release of the recent IPCC report.

A climate migration scientist present at the demo, Boris Hulesch, played a part in helping influence XR strategy since the beginning of the movement. He offers some interesting insight as to how the movement is adapting to the climate emergency.

“I’ve been thinking about climate change for the last 17 years now and I think it’s the biggest challenge humans will ever face,” he tells The Ecologist. “When XR showed up, I had this moment of epiphany – like this is the moment I’ve been waiting for. These are the guys saying the stuff that I believe in.”

I ask him how the movement is changing and adapting to the emerging science, such as the findings of the recent IPCC report. “The science has been the same since 1988. Yes, it’s become more accurate and more devastating over time. We aren’t adapting to ‘emerging science’ per se. We are adapting to the lack of action that we’re experiencing. Escalation is the name of the game.”

He adds: “Just Stop Oil and Insulate Britain are both forms of the escalation that we need. Marching and protesting don’t work, and all the other non-violent action doesn’t work.

“I believe in the disruption of critical fossil fuel infrastructure. It cannot be stopped from the demand side – it must be stopped on the supply side. That’s something I’ve been banging on for about fifteen years. It’s no longer about us consuming because if someone is taking oil out of the ground, someone is going to use it.”

For the first time in history, the climate movement has been brought into the heart of the city streets, woven together over three simple demands: love, care, and a fundamental commitment to climate justice.

But it seems as if the movement isn’t growing as rapidly as it needs to be. Stifled by the pandemic and general apathy among the public, it’s becoming clear that there isn’t enough support to bring about the change that is truly required to limit warming.

There’s a band of trumpets, the muffled voice of a man singing environmental justice poetry through a megaphone. It feels like it’s time to part. I take some rest under the shade of a Dutch Maple. Hulesch’s words ring in my head.

I watch the colourful mass of dancing, singing, shouting, and drumming parade down the street. After a while they are followed by hordes of police, who are then followed by police cars, then riot vans. It doesn’t take long for normal traffic to reclaim the streets.

As the protestors edge away, and their chants are slowly drowned out by motor vehicles. It’s as if they were never here. The humdrum of the city streets prevails. A few minutes later, an old woman walks past me and asks me if I was part of the demo. “Indeed,” I smile.

“God bless you. In Nigeria, where I’m from – things are bad too, and then look at Ukraine, why are people savaging each other? Its money and power – it drives the world crazy! We need more people on the streets, I believe that together we can make something happen.”

She turns away and walks down the street with an XR sticker on her pulling trolly. I feel hopeful.

Yasmin Dahnoun is a member of the editorial team of The Ecologist online.

A Guide to the Safest, Most Eco-Friendly Laundry Detergents

Could thorium be the future of fuel and energy?

An article all about alliteration in brand names

Micro-city in the desert embraces a utopian, sci-fi design