‘fonarnye bani’ one of the oldest — dates back to 1870 —and historically significant bathhouses in st. petersburg, russia, has opened its doors again after 15 years and a large-scale reconstruction. megre interiors collected the fragments they found in the dilapidated building including stucco, decor, brackets, rods, cornice, and together with the restorer rafael dayanov, they sought to recreate some areas of the structure and returned them to an image close to the historical one. for most of the complex, this was not possible, and the designers had a difficult task to rethink the historical building in the context of modernity.

its precise cleanliness is the cornerstone of the baths, and therefore the harmonious basis of the visual concept

to find a balance between historicism and modernity, megre Interiors chose the path of purity of design solutions.  it was important for the designers to draw the guests’ attention to the preserved elements of architecture, proportions, and volumes while creating a cozy, functional space. the further the guests move from the entrance to the steam room, the cleaner the interior becomes. from a cozy lobby with rich brick bardo walls and a carved chocolate wood fireplace to a snow-white soapy lobby framed with a thin black line accentuating the historical architecture. 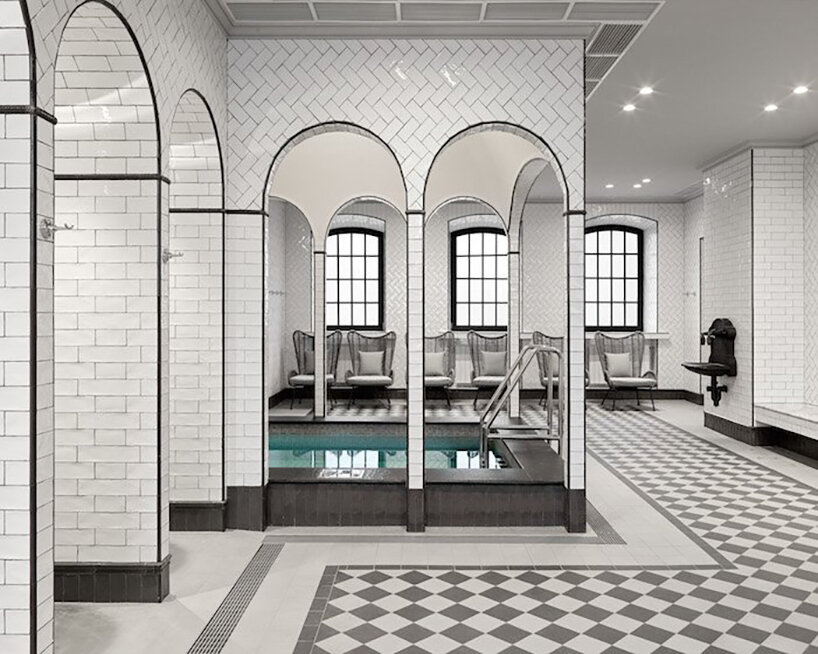 cast-iron sinks have returned to their places

thanks to the efforts of artem shakhnazarov, it was likely to restore the possibility of using the front entrance from fonarny lane. at his request, megre interiors recreated the interior of this space using an exact replica of the tiles that were in the building 150 years ago. a fragment of it was found during the dismantling of an old wooden cash register, which had stood there since the 1930s. 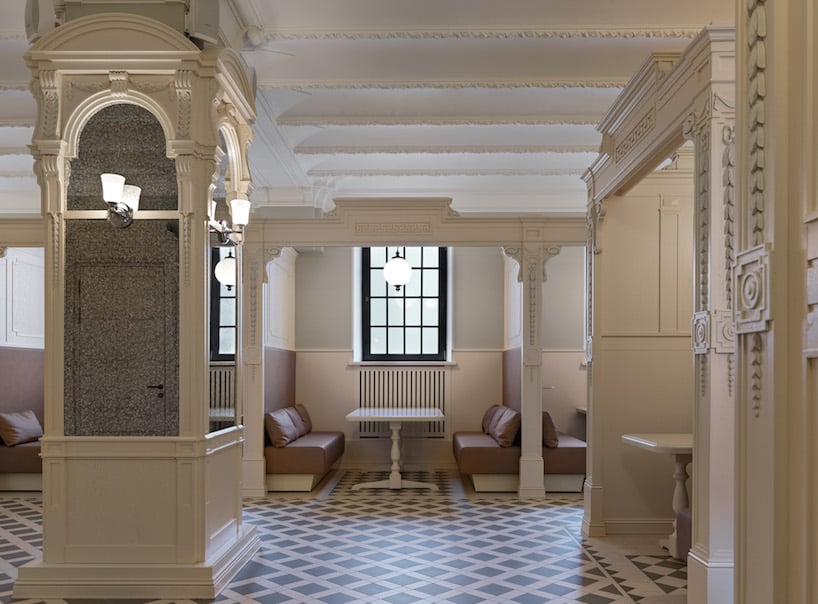 the restaurant was inspired by the contrast between the heat of the baths and the cold of the russian winter. bustling and filled with air, it seems to be shrouded in frost and is a refreshing end to a visit to the fonarnye bani

the designers also restored the area of ​​the boutique of bath products at the entrance. through the main staircase, guests enter the main lobby of the baths, in the center of which there is a circular reception designed based on carvings from that historical period. thus, visitors enter the building directly to the second floor. when developing planning solutions, megre interiors retained communication through the central cross of corridors and stairs created by suzor. 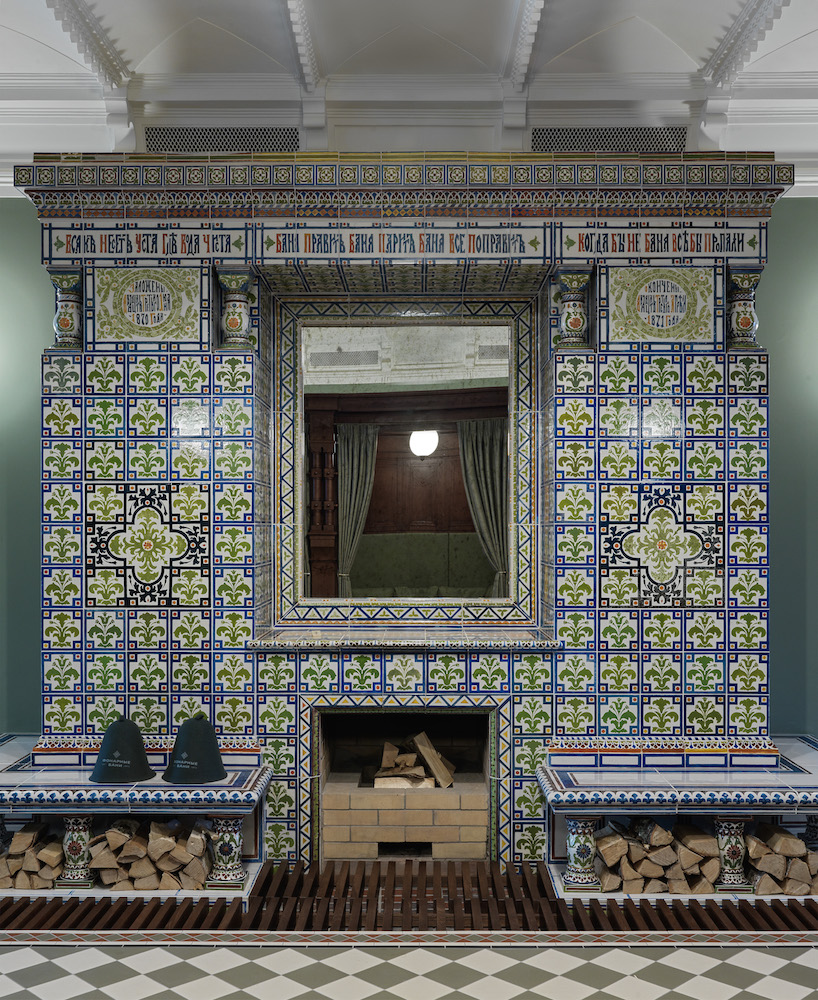 the second floor houses the main lobby, with its fireplace and cozy sofas, a cafe-pub with cast iron tables restored from found engravings and marble walls, changing rooms, a salon, and a barber’s office. on the floor below there are economy and individual rooms and a cozy restaurant above. in the female changing room, the designers created a romantic enveloping interior filled with elements inspired by the surviving engravings of this space. a large-scale carved fireplace and a central column are added to create a coziness that is not inherent in changing rooms and typical baths. in the men’s changing room on the second floor, it was possible to restore a contemporary of the building – a tiled fireplace and a bronze mascaron with a triton’s head. 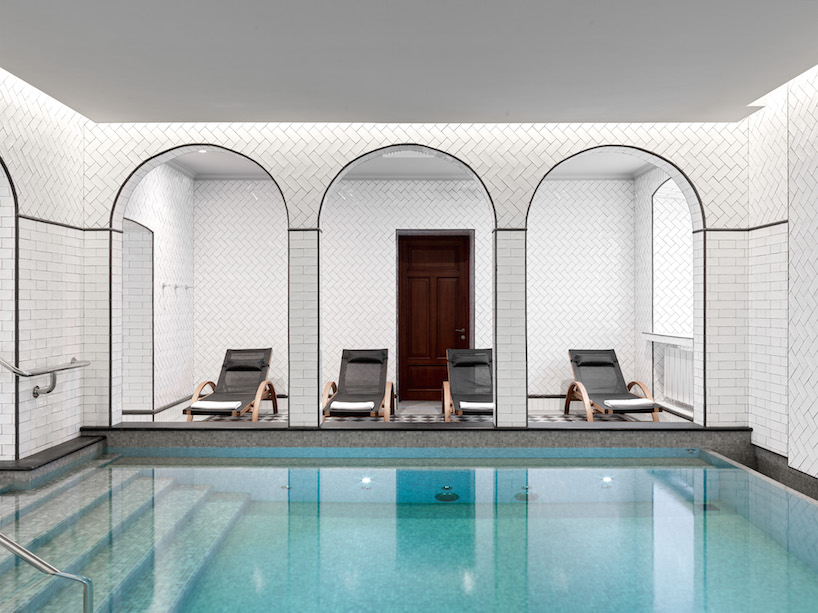 the interior of the men’s recreation area has been restored according to historical sketches and the entrance area was created to resemble a similar style and mood. the furnaces — after the renovation of the 1930s — were preserved during the reconstruction. the soap zones of both locker rooms are united by a single aesthetic solution. downstairs in the economy room, the designers have kept this principle while changing the appearance of the space through the use of other materials. the individual area exudes comfort and richness, with its recreation areas, refectory, and bath areas. getting into it, visitors forget that are in public baths and not in a private merchant’s house. 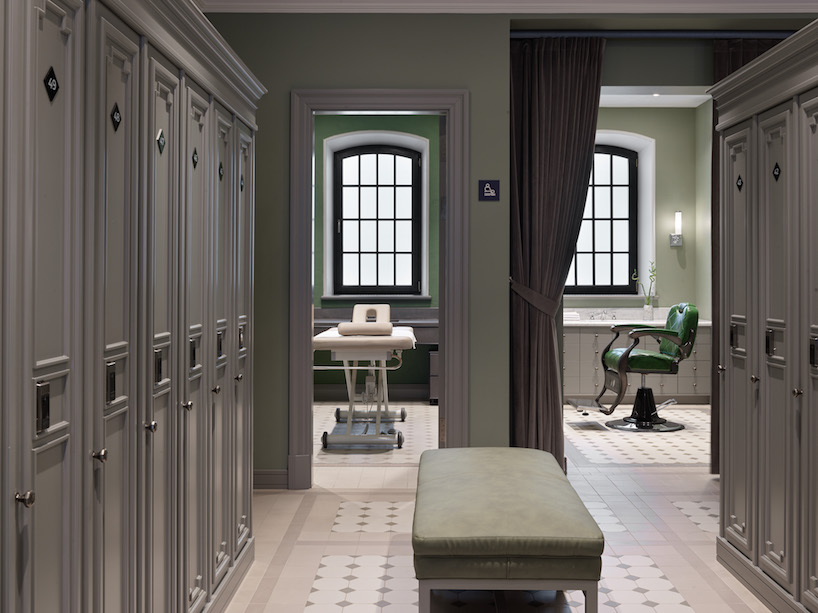 designboom has received this project from our ‘DIY submissions‘ feature, where we welcome our readers to submit their own work for publication. see more project submissions from our readers here.

Generic logos: how to spot and avoid them

Time for a logo redesign? Why and how to do...

The 6 key principles of logo design

40 colorful logos that are brighter than the rainbow

What is branding? And how to harness its power in...

22 crucial logo questions to ask your client or designer